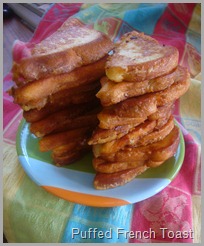 Happy Saturday morning! I'm sitting here on my bed (with all three boys) after enjoying a mini-celebration breakfast. Why celebrate do you ask? Well because usually at this time of year I’m so stressed out and behind in grading that I am miserable and tired (from staying up late and getting up early) but…(drum rolls please) I finished my written final exams (essays) last night. It was about 3 am when I finished inputting them into my grade book (Thad read the scores to me) and I was so excited. I was going to fall asleep to a movie about midnight after grading a bunch but when I put in the movie August Rush I got a spurt of energy and kept going until I finished one more set! WOO HOOOO! Anyway, so I celebrated by fixing myself (and anyone else who wanted to eat) some yummy Puffed French Toast from one of my favorite blogs, Our Best Bites.

This stuff is heavenly and I felt like I was eating in a restaurant the first time that I ate it (even though I was in my PJs in my dirty kitchen!) It makes enough to feed a small army (since it is very rich and you can’t eat too much) but it is delicious and freezes well. I put the leftovers on a cookie sheet or a plate in the freezer and then when they’re frozen throw them in a baggie for a quick meal. Heat them 15 seconds or so in the microwave, cover them in the cinnamon sugar mix and wa-lah, breakfast!

Puffed French Toast by Kate at Our Best Bites

Directions: In a large skillet or frying pan, heat about 1/4" of vegetable oil (not olive oil) over medium heat. In a shallow bowl or pie plate, whisk together eggs, sugar, salt, vanilla, milk, flour, and baking powder. Test oil heat by flicking some water into the frying pan. If it pops, reduce the heat. If hardly anything happens, turn up the heat. If it sizzles, it's just right.

Working quickly, take each 1/2 slice of bread and soak it both sides in the milk/egg/flour mixture. If you leave it in too long, it will get soggy, but you want to make sure enough of the egg mixture has soaked into the bread. Gently shake to remove excess batter and place in hot oil. Cook until puffed, golden brown, and a nice, crispy crust has formed on each side (probably 3-5 minutes per side; you really need to babysit them and make sure they're cooking correctly) and then remove from oil and drain on a paper towel. While cooking remaining French toast, keep cooked pieces warm in an oven set to the lowest temperature it will go. When ready to serve, roll each piece in cinnamon sugar.

Now that I’ve shown you a recipe that will NOT help your waistline and that is a once-in-a-while dish, here is something that I’ve made at least ten times this month (after making the mix a few weeks back), they are delicious AND they’re healthy! This recipe is from another favorite blog of mine, My Kitchen Cafe, that I found while “nesting”. The recipe is Oatmeal Pancake Mix. I love it because it’s a bit “nutty” and unique versus other pancake recipes and I love that I fix the mix once and then it’s an easy after school snack or quick breakfast later on since you leave the mix in the fridge and then just add milk and one egg and go! Sammy has been known to eat 8 or more of these pancakes in one sitting! 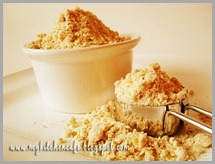 Oatmeal Pancake Mix by Melanie at My Kitchen Cafe

To prepare the pancake mix: Mix all the dry ingredients together in a mixer with a paddle (or by hand). With mixer on slow speed (or gently by hand), drizzle the vegetable oil into the bowl slowly while the mixer is running. When all the oil has been added, stop the mixer and squeeze a clump of mix in your hand. If it stays together, it is just right. If it is still crumbly, add another tablespoon of oil at a time until the consistency is correct (I've never had to add additional oil). Store in an airtight container for up to two weeks at room temperature or indefinitely in the refrigerator or freezer.

To make the pancakes: Whisk together 1 cup of mix, 1 cup buttermilk** (a combination of half plain yogurt and half milk will also work), and 1 egg. The mixture may seem thin at first but the oats will soak up the milk as it stands while the griddle preheats. Heat a griddle and drop the batter onto it. When the edges look dry and bubbles come to the surface and don't break, turn the pancake over to finish cooking on the second side. As a side note, buttermilk can be frozen indefinitely for future batches of pancakes, so it's worth keeping it around! 1 cup of mix will make about 6-8 4-inch pancakes. (I usually am able get 10 or 12 of them)

**If you don’t have buttermilk you can make it by taking a little less than 1 cup of milk, adding 1 Tbs. of white vinegar, let it stand for 5 minutes and then you’ll have buttermilk for your recipe! :)

Posted by Allison at 4:24 PM No comments: 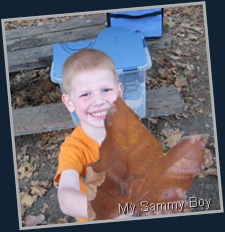 Here are some things that Mommy has overheard Sammy, age four, say…

"When I'm eight I'm going to be baptized but I'm scared to go under the water!"

(Whining) "Awww, these sandals are going to break my feet!" (I still don't know what this one means but ever since I pulled out a pair of lace up shoes he wants nothing to do with his velcro sandals or shoes and says this every time).

"Mommy, will you read that story to me again, but don't cry this time, okay?" (I admit to crying when reading the Friend with him, c’mon, some of those stories are really sweet!)

"Ugh! I'm going to give you away!" (When he's angry he tells us this, maybe because we give toys away if he's too naughty or breaks things?)

"I don't like that mean mommy." (He once told me that I'm the mean mommy when I have my hair down and that he wanted me to put my hair up so that I was the nice mommy).

"I can kiss Danny on the lips since I'm really careful." (I would prefer that he kisses Danny on the head or cheek but he has his own ideas!)

…and my personal favorite (that he has said quite a few times so I think that he has really thought about this!) 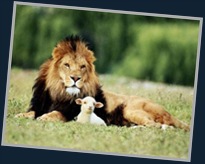 ** Two more things that he told me the other night before heading to bed... "Mom, when I get bigger I don't want a really big bed, okay? And I don't want one of those timer things to wake me up in the morning." The second one made me laugh because I don't have a timer thing to wake me up so I don't know where he learned about those (I have three human alarm clocks in the form of little boys named Sammy, Nate and Danny!)

"Mom, when Jesus comes again can we have a sleepover with the lions?"

Our friends Doug and Hyemi

We got to go to the Los Angeles Temple this past week with our friend Doug Choi. He is a really neat guy who is a great friend and an awesome member missionary. His sister Hyemi was baptized a week ago and then he was able to go through the LA Temple last Tuesday before he headed back up to school at BYU. What a special time for both of them! 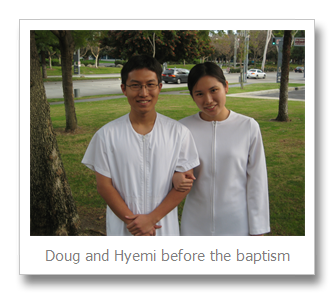 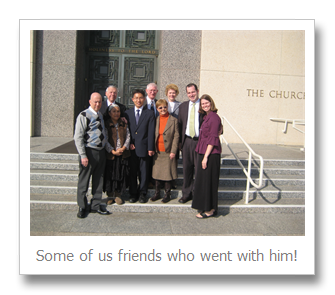 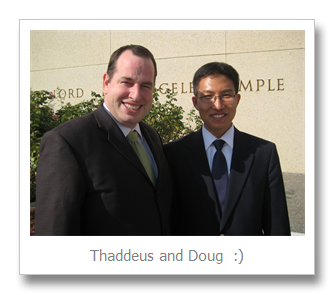 P.S. Doug has also fallen for our little Daniel (that smile has won him quite a few fans!) and Danny seems quite happy to be held and hugged by him! Here is a picture of them at the ward Christmas party! :) 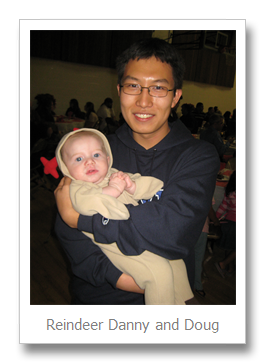 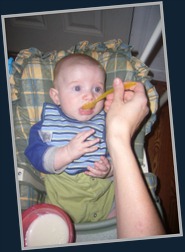 Yum? Not really, but Danny seemed to like it quite a lot! Now that he’s four months the doc gave us the okay to feed him rice cereal so here it is documented! He did quite well and ate all that I fixed for him and kept most of it in! I was very impressed. He was very interested and kept opening his mouth and seemed to “get it” if that makes sense. No weird or grossed out frowny faces for him! Go Danny Dan Dan! :)

Things overheard at our house… 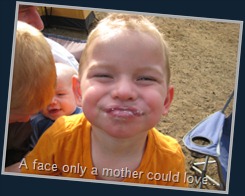 If you were here at our house you WILL hear Nathan yelling all sorts of things (at all hours of the day/night). Some of the things he yells (or says really loudly) are:

He usually is very cute and charming but he has got a set of lungs on him and when he wants to be heard I think that the whole neighborhood hears him!

Posted by Allison at 9:28 PM No comments: 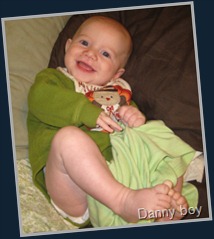 I can’t believe that Daniel is already four months old! How time flies! He is such a happy baby who smiles at anyone and everyone, although he definitely loves his mom and dad the most! He loves having two older brothers and they just adore him and I often catch him staring at Sammy in the car with a huge grin plastered on his face! He is chewing on anything he can get into his mouth and loves to smile, coo and giggle!

He had his four month checkup and it is nice to not think that I’m crazy (since he seemed so big compared to the other babies I’ve seen…) He is 17 lbs 4 oz (I thought that he was a bit heavy!) but he’s not pudgy--just solid as a rock like the other two. He also measured in at 27 inches long (or the size of an average 7 month old the doctor said!) I guess it is in the genes! Dr. Cheng said that he was healthy, growing well and his size/weight are in proportion.

We look forward to watching him grow up and to see what his hair will look like (since he’s still pretty bald). He looks a lot like what Sammy did when he was little; I enjoy trying to trick Thad by asking him to guess which baby is which! We feel very blessed to have him in our family. :) 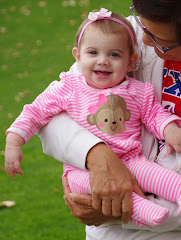 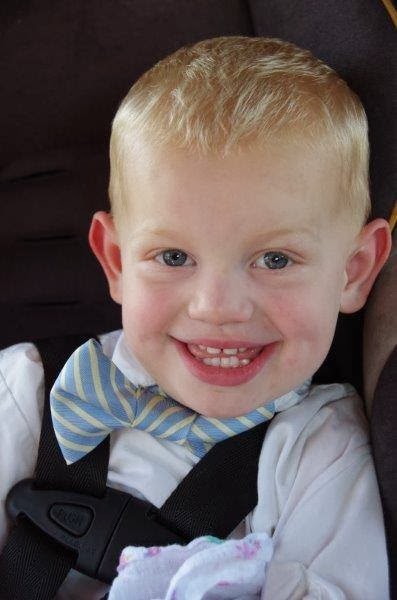 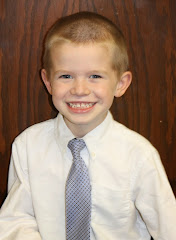 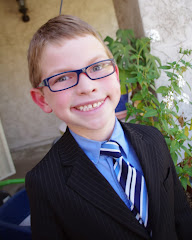 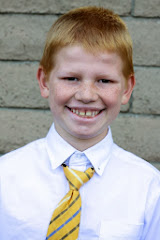